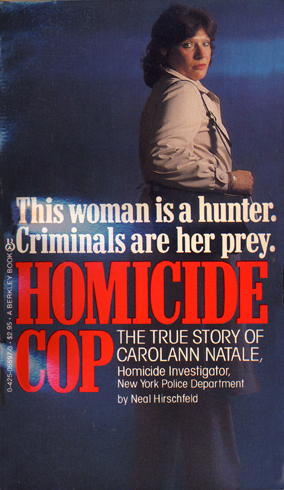 FROM THE COVER OF "HOMICIDE COP":

A woman can do anything a man can do. Especially THIS woman.

She's a small-town mother of two, a onetime watiress who dared to become a cop on the toughest turf of all: the crime-ridden streets of New York City. Opera is her pleasure, heR family is her pride and joy—but murder is her business and the perilous Fourth Zone her beat. Detective Carolann Natale—one of the first women ever to be appointed to the homicide squad of the NYPD.

What's it really like behind the gold shield? New York Daily News reporter Neal Hirschfeld follows Detective Natale on her rounds, tracing the barest clues to trap a killer rapist, using her femininity to defuse violence, employing brain instead of brawn, but facing danger with a cool head and a deadly aim when the chips are down.

It's all here in the true story of Carolann Natale...HOMICIDE COP.

"Homicide Cop" can be purchased from Amazon.com, bn.com, Booksamillion.com and backinprint.com.