Buy "Detective" on Amazon. com by clicking on the image of the book jacket below.

"Kathy Burke is one of the most courageous people I know. When I was mayor, I presented her with a medal for that courage. Her book, Detective, is an absolute spellbinder."
—Former Mayor Ed Koch

"Kathy Burke’s gripping account of her years as an NYPD detective proves that courage, integrity, and loyalty come in many forms. Her stories of facing down danger and challenging evil on the streets of New York are the stuff of high adventure and drama. As this book so excitingly demonstrates, Kathy should be a heroine and role model for law enforcement officers, for women, and for all the rest of us who prize the core values she has spent her life and career pursuing."
—Mark Olshaker, author of The Edge, co-author of Mindhunter

"Detective is a reality check for those whose impressions of policing come only from television. Anyone—woman or man—who dreams of being a big-city detective should read Kathy's story.
—Dorothy Moses Schulz, Professor, John Jay College of Criminal Justice and author of Breaking the Glass Ceiling: Women Police Chiefs and Their Paths to the Top

"OUTSTANDING—the best police book I have ever read! It is brutally honest, provocative, and touching. This book will inspire every woman who works in any male-dominated field—not just law enforcement. Kathy Burke is an internationally recognized icon in policing.”
—Sgt. Amy Ramsay, PhD, Executive Director, International Association of Women Police

"There is a hellish private place that waits for all cops. Some of them never get there. They're the lucky ones. Others, once in, can never get out. A few survive to make the round trip, and a very few can talk about what they've managed, somehow, to live through. Kathy Burke is one of those very few, and, with the gifted assistance of Neal Hirschfeld, talks about it like she lived it, and makes us live it too. It's a harrowing ride, rough as the truth always is, but [it] ends with defiance and resiliency and optimism that is absolutely compelling because it is so hard won. There are a many books about The Job. This is one of the best I know."
—Jay Cocks, screenwriter, "Gangs of New York," "Age of Innocence," "Strange Days"

“In her fast-paced “as-told-to” autobiography…Burke offers an insider’s view of the life of a female undercover drug cop working in a field in which women were rarely treated as equals. Beginning like an action film…Burke’s book, which is packed with action and suspense, tells an inspiring story of a woman who beat the odds more than once.”
—Publishers Weekly 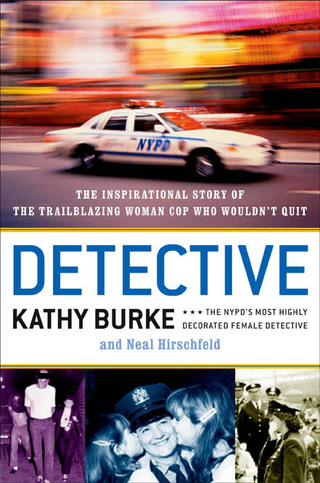 To buy "Detective" online at either Amazon.com or Barnes & Noble.com, go to the box headed "Quick Links" which appears on the right-hand side of this page, find the site you prefer and simply click on it. Or, to go directly to Simon and Schuster website, where you can read more about "Detective" and order it directly from the publisher, click on the flashing icon for SimonSays.com below.

Detective: The Inspirational Story of the Trailblazing Woman Cop Who Wouldn't Quit

A cop’s story, a woman’s story, a survivor’s story—Detective is the compelling “as-told-to” autobiography from the most highly decorated female detective in the history of the New York City Police Department.

Over the course of her twenty-three year career, Kathy Burke rose to the rank of detective first grade, the very highest in the detective bureau. She also received New York City’s highest commendation for heroism, the Medal of Honor. However, her journey to the top wasn’t an easy one.

From her beginnings as an undercover cop making drug buys on New York’s most dangerous streets to posing as Mrs. Patz to capture extortionists in the Etan Patz case to investigating the Mafia, Burke worked in some of the NYPD’s most elite units on its most high-profile cases. But her successful career was also marked by intense controversy stemming from a landmark federal lawsuit that Burke filed against the police department for sexual discrimination, her own direct and confrontational personality, and a tragic shooting that left Burke gravely wounded and her male partner dead.

Told in Burke’s frank and candid voice, this revealing story of the NYPD is brimming with hair-raising adventure, heroism, and provocative behind-the-scenes details. But it’s also a personal story of inspiration from a pioneering woman who survived hostility from the male establishment, years of recrimination, and even a treacherous battle with cancer.

"Detective" is a groundbreaking book.